Architectural student Dimitrios Mitsimponas proposes a new scenario for the manufactured landscape of Giali, an uninhabited volcanic island in Greece. Mining works have extensively affected the island’s natural landscape, creating many environmental and social effects. The idea explores the relationship between production infrastructure and leisure programs to reclaim the mining sites and create a new economic policy for the local communities. The designer proposes the utilization of Giali’s geothermal energy through an architectural program in which the energy production and the bathing element are the main points of interest. According to a cascading system, each space is organized depending on its heat and humidity needs, from warmer to cooler.

The observation of Giali’s landscape, which was drastically transformed by anthropogenic factors, was the triggering point of the thesis project by Dimitrios Mitsimponas. This volcanic island belongs administratively to Nisyros, and two mining companies operate in four locations. The leasing of the lands to those companies is the most important source of income for the Municipality of Nisyros. Apart from the tree planting scheme imposed by the legislation for their lending to reclaim the mine, no other plan has been proposed regarding the island’s development after the completion of the mining works (which have a fixed time horizon). On the southwestern part of the island, the gradual merging of the manufactured with the natural landscape looks like a living canvas that depicts man’s imposition on nature. A primary concern during the design phase was how different programs could be introduced to Giali sustainably, so creating a new scenario was deemed appropriate. It is proposed to utilize its geothermal energy through an architectural program in which the energy production and the bathing element have the leading roles. Geothermal energy is the energy in the form of heat contained inside the earth. It belongs to renewable energy sources, and due to its minimal environmental footprint, it can contribute to a state’s or region’s energy autonomy and security (Varvitsioti & Tsifoutidis, 2021). Giali’s geothermal field is of high temperature, suitable for electricity generation through the installation of a Binary Cycle Power Plant. The geothermal power plant is a heat hub that produces electricity for Nisyros, meeting its needs. The waste energy of this geothermal station is consumed directly at Giali’s bathing facilities, just as geothermal sources are used by different cultures for purification and relaxation. The proposal differs from the standard techniques for reclaiming mining sites, and it explores the connection of the plant’s industrial character with the stimulating aura exuded by the baths. It is also in harmony with the ‘genius loci’, highlighting its distinctive atmosphere. The porous building is integrated into the landscape, and the ground becomes the design subject. Sigfried Giedion (1970, p. 628), in his book ‘Mechanization Takes Command’, notes that ‘the bath and its purposes have held different meanings for different ages. The way a civilization incorporates bathing within its life, as well as the type of bathing it prefers, yields searching insight into the inner nature of period’. Similarly, the design of the baths in the industrial landscape of Giali and its proximity to the geothermal power plant constitutes a new challenge that stimulates the visitors’ interest and encourages them to be informed about the origin of energy in modern societies, to reflect, and to relax In addition, water, smells, changes in temperature and light, and the contact of the body with materials and textures provoke different emotions. The building belongs to a typology of constructions that explores the relationship between production infrastructure and leisure programs, and it is a hybrid where all the senses are stimulated. 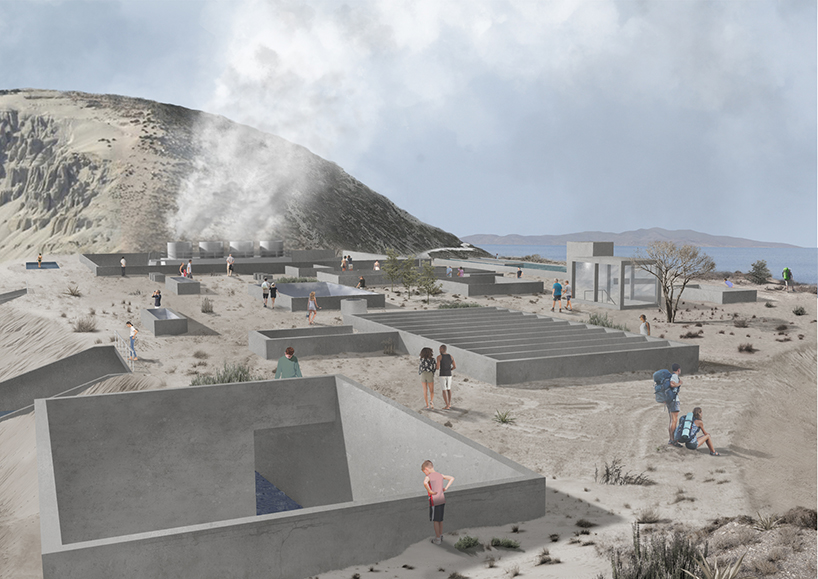 the building, at first sight, remains hidden, but it declares its existence through steam emissions 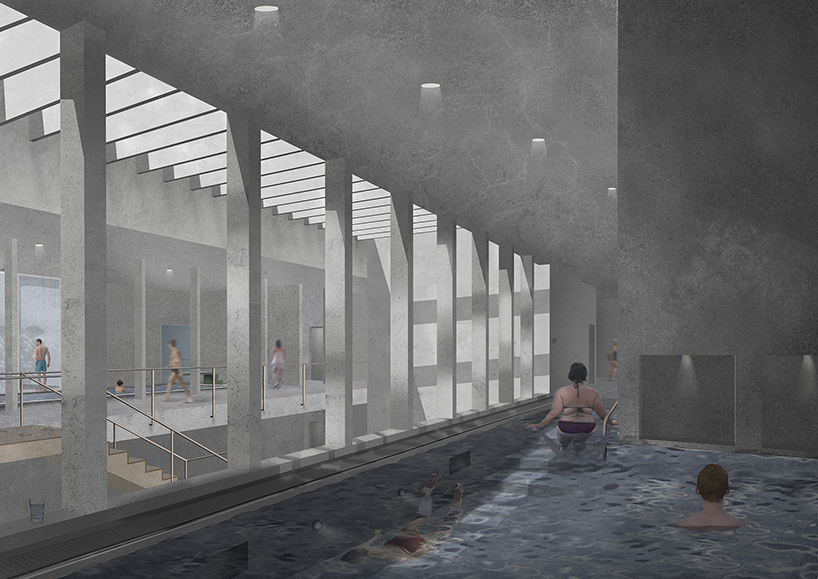 the central interior space of the baths creates a spatial continuum